Reza Daffi is a translator and (occasional) writer based in Yogyakarta, Indonesia.

The edited version of this piece appeared on the Jakarta Globe (print) on July 10, 2012 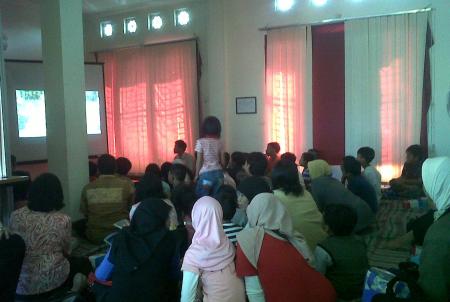 Film screening at the 2nd floor of Yogyakarta Municipal Library

“If Hanung Bramantyo can do it, we can do it, alright!?” shouted Krisna Mulawarman, a broadcasting lecturer at the Muhammadiyah University of Yogyakarta, in front of a room at the 2nd floor of the Municipal Library of Yogyakarta on Thursday (6/5) morning. Before him were a bunch of kids, sitting on the floor looking afire. These youngsters responded Krisna’s rhetorical question in sync with a quick, loud alright.

The above scene happened in the last day of a three-day filmmaking workshop for children entitled “Asyiknya Membuat Film” (“The Fun of Making Films”) held by the government library.

The program started on Tuesday (6/3) with filmmaking lessons from 8 in the morning until 12, in which camera angles, narrative structures, and some technical know-how were taught. In a same amount of hours, the next day was spent for executing the shooting process.

About 25 children with their parents packed the room, which was actually not wide enough that some dads and moms had to sit outside. They were there for the last day’s film screening and discussion session. Two shorts and a behind-the-scene video were to be run on the 2m x 2m white screen. These were not just some films, though; their creators were the little boys and girls.

The first film, entitled”Pembela Bumi” (“Earth Protector”), was a very interesting one in terms of techniques. Its character is a trash bin whining about how it is ignored by people walking by. It features some surprisingly purposeful angles (a low-angle shot on a road sweeper to make him look heroic, a close take on the trash bin when it is speaking, etc.). Moreover, the message is clear: do not litter—a simple yet important one especially in Indonesia.

As for the other film, called “Bukuku, Cahayaku” (“My Book, My Light”), it has a stronger story line. It tells about a street boy who loves to read. He is bullied by a group of kids while reading a newspaper piece at a crossroad. In his dejection, two sympathetic girls come along, give him their books and take him to a writing competition, which he wins by defeating those that bully him before.

The acting was quite convincing—the actor, Calvin, 10, was actually given money by some passers-by while doing his miserable street boy character. All the audience clapped their hands in appreciation to the ending. “I’m happy. I want to do this again,” Calvin expressed his feelings. The parents’s eyes and gestures did enough to show they were really proud.

This is actually something new to many of us, and it is good that such program is held. “Mrs. Afi (the head of the library) wanted to make a program for children to fill up the school holidays. I had been thinking of other things like an outbound activity before coming up with this idea,” Faiz said when asked of how it all began. The Wonosobo-origin admitted that he did not know anything about filmmaking and was lucky to know a friend of Krisna.

So, the two met up and, involving some Krisna’s students, started to develop a plan. They soon had to look for all the necessary equipments they could borrow for the event, including a DSLR camera for making the films.

The response exceeded their expectation. They would initially accept only 20 kids, only to find that they had to make room for more. Parents turned out very supportive and did not mind at all to pay the Rp50,000 fee. “It’s nothing compared to what the kids get from here,” said Farida, one of the mothers.

What Faiz had in mind with this program was actually an important, yet often overlooked, matter. “It’s media literacy for children,” Faiz explained. “With all the national television programs we have in this country, it is necessary for them to know what’s good and what’s not for themselves.” But not just that, it also sought to let the children know that they could make their own film when there was nothing good on television.

The post-screening discussion already showed a good sign of knowledge development. Putu, 10, a sound crew of the first film, said that in one outdoor scene, while he realized the dialog was not clearly audible, it was difficult for him to reduce the street noises. “But we’re not professional yet so maybe we could do it when we have the proper equipments,” the boy said.

Another kid, Yoshua, 12, had a different issue. Questioned why he had the street boy in the second film wear an oversized T-shirt, he made clear that it was intentional. As he insisted, a well-fitting T-shirt would make the poor boy seem to have a choice in what he wants to put on and that was the opposite of what the film wants to convey.

The program is over for now, but there is a plan to hold this again next year. Faiz noted that the kids were not yet involved in the editing so he hoped in the next opportunity, they would be able to teach them that as well.

Nearing the end of the day, a parent asked if they would want to build a children film community that gather regularly. Faiz himself thought that it was a good idea. And as both the parents and the children were keen, Faiz realized that their effort should go further. “Now it’s become our responsibilty to follow this up,” he said with a smile.